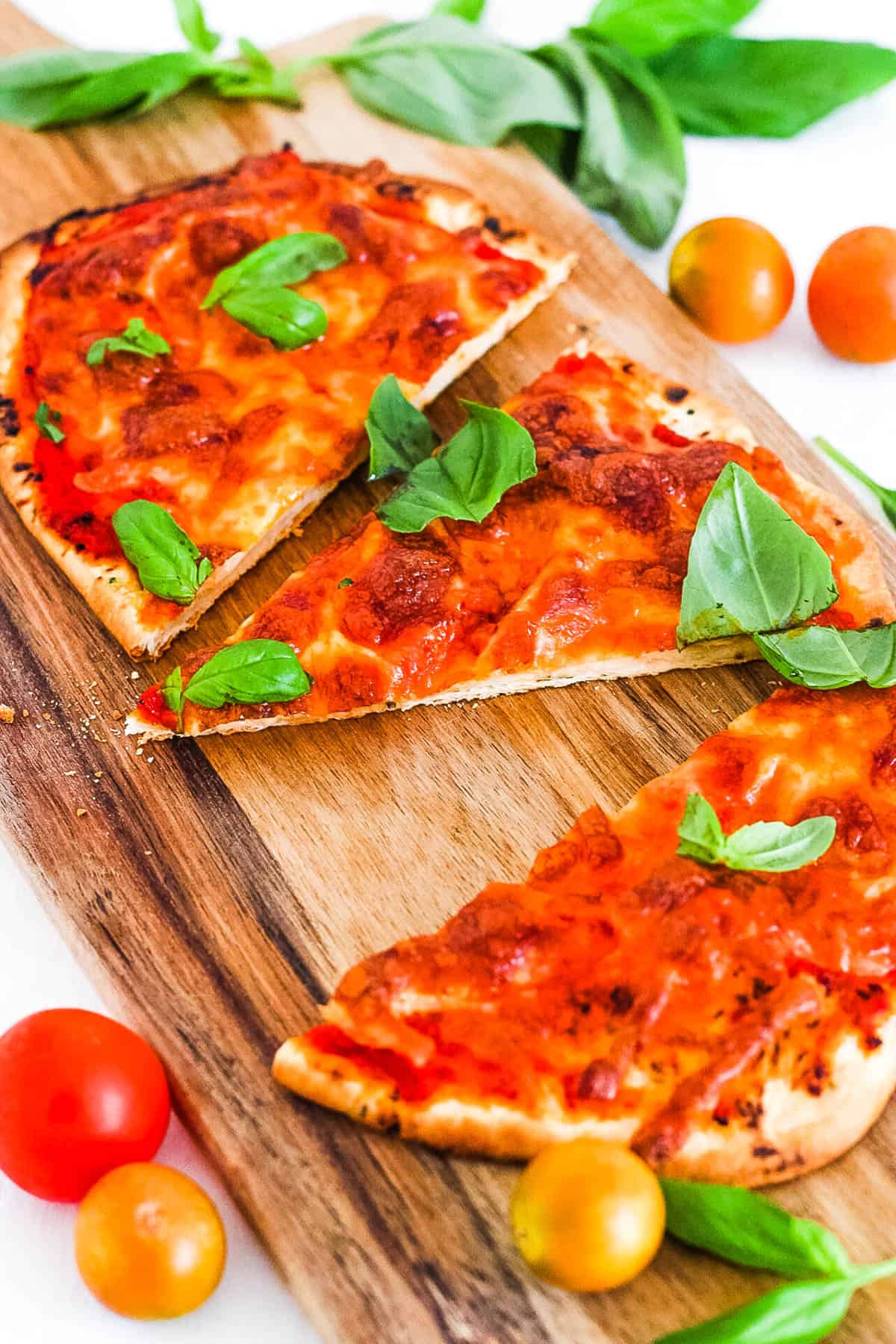 This post may contain affiliate links. As an Amazon Associate, I earn from qualifying purchases. Please read my disclosure.

Naan bread pizza is a simple yet delicious take on pizza night! Just spread marinara on naan bread, sprinkle with your favorite toppings, and bake until the edges are golden brown and the cheese is bubbly! Ready to eat in less than 15 minutes!

We love pizza night in our house, and since we make it so often, I’m all about finding simple shortcuts to make delicious pizza even easier to make!

What’s my secret? I use naan instead of pizza dough to make the crust and oh-man is it good! The edges are golden brown and crisp, while the cheese is bubbly and melty. And you can say goodbye to a soggy crust. Naan pizzas come out perfect every time, for quick dinners with no headaches or mess.

I like to make a naan pizza bread station with all the toppings. My kids love to make their own pizzas, choose their own toppings, and sprinkle the cheese.

This easy meal is faster than delivery and a million times better than frozen pizza! Pizza with naan bread is my go-to dinner when I need something quick, family friendly, and picky-eater approved.

✔️ What Is A Naan Pizza?

Basically, a naan bread pizza is exactly what it sounds like! Instead of pizza dough, you take a big shortcut and use pre-made naan for the base of your pizza.

Naan is just another name for an Indian flatbread that’s yeast leavened and baked in the oven. It’s soft and fluffy and the perfect size for an individual pizza base. It makes for an easy pizza recipe that’s ready in minutes!

👩‍🍳 Why This Recipe Works

This easy naan pizza recipe calls for five simple ingredients for more flavor, but really all you need is naan, gooey cheese, and sauce! For recipe variations, full recipe instructions, and nutritional information, see the recipe card at the bottom of the post.

There are a variety of toppings that work with these naan pizzas! Here are some of our favorites:

Try one of these delicious naan pizza ideas:

🔪 How To Make Naan Bread Pizza

This pizza naan recipe is so simple! Here’s how you make it:

Preheat Oven & Prep: Preheat the oven to 350 degrees Fahrenheit. Lay the fluffy naan on a baking sheet and spread each one with a layer of marinara sauce.

Add Cheese: Sprinkle the oregano on them, then top with the shredded mozzarella and fresh basil. Add your favorite toppings here.

Bake Naan Pizzas: Cook in the preheated oven for 15 minutes, or until the edges are crisp and the cheese melts and turns golden. Add a pinch of salt and enjoy!

Is naan and pizza dough the same?

No, pizza dough is made from yeast-risen dough that’s rolled thin. It typically contains flour, yeast, salt, olive oil, and water. Naan bread is also a yeast-risen dough, but it typically has additional ingredients like yogurt, eggs, and sometimes butter. Naan bread is traditionally cooked in a tandoori oven or in some cases a sizzling hot skillet.

How should I store naan bread pizza?

Store leftover pizza in an airtight container in the refrigerator for up to 4 days or freeze for up to 3 months. Never reheat pizza in the microwave or it will get greasy, soggy, and chewy. Instead, reheat in a 350 degree preheated oven until warmed throughout.

Can I grill naan pizza?

Yes, naan pizzas are great for grilling! Simply transfer the prepared pizzas to a preheated gas grill around 350 to 375 degrees. Don’t put the flatbread directly over the flame or the bottom will burn. Cover the grill and cook for 10 minutes or until the cheese is melted and golden. Let the pizza cool for a few minutes before slicing and enjoying.

LOVE THIS RECIPE? Please leave a 5-star rating 🌟 in the recipe card below and/or a review in the comments section further down the page!

Naan bread pizza is a simple yet delicious take on pizza night! Just spread marinara on naan bread, sprinkle with your favorite toppings, and bake until the edges are golden brown and the cheese is bubbly! Ready to eat in less than 15 minutes!